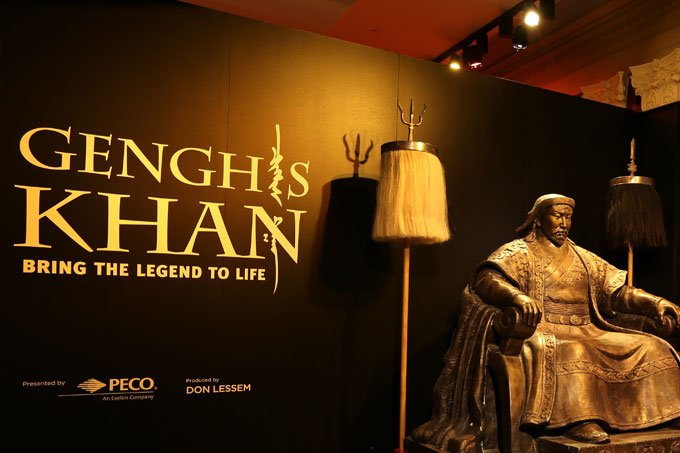 Developed by Philadelphia-area dinosaur expert Don Lessem, who realized the depth of Genghis Khan’s story while working in Mongolia, the global tour exhibition explores the culture, conquests and heritage of the world’s greatest conqueror Genghis Khan – the man inTime Magazine and the Washington Post named “The Most Important Person of the Last Millennium”. It features well over 300 spectacular objects, including rare and sophisticated weapons and formidable array of swords, bows, arrows, saddles, and armor. In total, these priceless original artifacts from Genghis Khan’s 13th century empire form the largest such collection ever to tour.

The exhibition is promised to be an “immersive experience” for visitors as they are given an identity of a Mongolian resident – randomly selected from the choices: a warrior, spy or princess – and follow their life throughout the rise of the great Mongol Empire across six key scenes and eight unique galleries. These scenes are the Grasslands, Rise of the Mongols, the Walled City, the Silk Road, the Palace of Kublai Khaan, and Mongolia today.

“This dynamic exhibition presents a more complete image of the legendary leader and the world in which he lived,” said United Nation’s Executive Vice President and Chief Operating Officer Jerry Baber in his statement. “Genghis Khan not only was a brilliant military strategist known for ruthless practices, but also a leader known for fierce loyalty to his people and a pioneer for religious freedom. Our guests will be invited to experience the Mongolian culture with the live performances of authentic Mongolian music, art and dance. In this exhibition, there truly is something for everyone.”

The expansive exhibition has been touring across Asia and North America since 2009 attracting more than two million visitors. United Station will present “Gengis Khan: Bring the Legend to Life” through April 30.